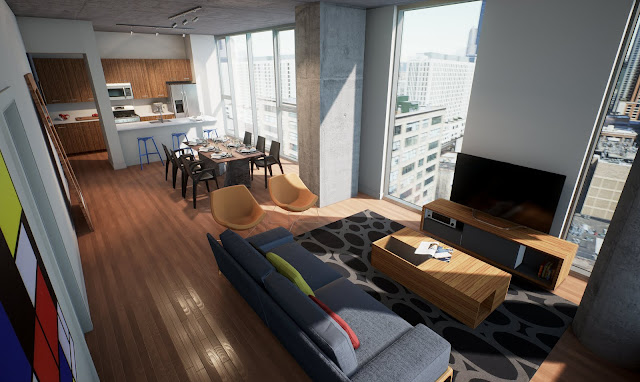 Welcome to the companion website for my book: Unreal Engine 4 for Design Visualization: Developing Stunning Interactive Visualizations, Animations, and Renderings Here you will find all the files and resources mentioned in the book along with a wealth of additional information to help you develop your interactive visualizations in Unreal Engine 4.

I've included all the source files and UE4 project files used in the book for you to follow along with. You can also use them to learn from or use for your own projects.

These are all authored with engine version 4.14 but should be able to be opened easily in newer versions of the engine. I'll do my best to post updated project files as the engine is updated if necessary.

Chapter 1, Getting Started with Unreal Engine 4.
With a detailed overview of UE4, you learn what UE4 brings to visualizations, what challenges you’ll face and how to overcome them, where to get help, and how to start planning your first UE4 projects.

Chapter 2, Working with UE4.
UE4’s workflow is likely quite different than anything you as a visualization professional have used before. Learn how the major elements of UE4 function together as a whole to create, edit, and distribute interactive applications.

Chapter 3, Content Pipeline.
Getting your content into UE4 can be one of the most initially confusing and challenging aspects of learning to use UE4. Learn how UE4 imports and processes 2D and 3D content from other applications and get some ideas how to integrate that into your existing pipelines.

Chapter 4, Lighting and Rendering.
UE4 introduces a revolutionary physically based renderer< that produces amazing results in a fraction of a second per frame. You learn to take your years of rendering know-how and apply it to UE4’s Physically Based Rendering (PBR) Lighting system.


Chapter 5, Materials.
Creating rich, lifelike Materials is essential for achieving photo realism. Materials in UE4 are an integral part of the PBR workflow and are different from any material system you have previously used. Learn how Materials are constructed, how the various components of PBR work, and begin to see how Material Instances make creating Materials in UE4 interactive and fun.

Chapter 6, Blueprints.
Blueprints are a revolution in scripting and game programming. You can now develop rich, cutting-edge applications without ever writing a single line of code. However, Blueprints are still a programming language, and learning the basics will enable you to jumpstart your development. 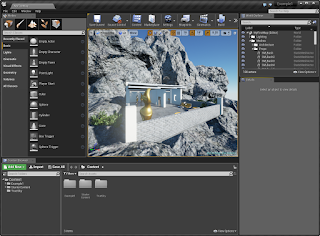 Chapter 7, Setting Up the Project.
Learn to define the project goals, and then discover how to create a new project and setup the basic Project settings to start with a selection of pre-made Starter Content to build your level from.

Chapter 8, Populating the World.
Using the Starter Content, you explore using the Editor for the first time, placing assets into the world to become Actors, moving them, modifying them, and then placing lights to illuminate the scene.

Chapter 9, Making It Interactive with Blueprints.
Build your first Blueprint classes, the Player Controller, Pawn, and Game Mode. You assign Input Mappings and program the Player Input, allowing the Player to move around the level in first-person view.

Chapter 10, Packaging and Distribution.
After your project is working, it’s time to get it ready to be distributed as a standalone application. In UE4 this is called Packaging, and it creates an optimized, easy-to install and run application you can easily zip up and send off. 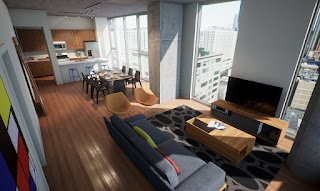 Chapter 11, Project Setup.
You once again define your project goals—this time for creating a high-end architectural visualization with several key deliverables: an interactive application and a pre-rendered walkthrough animation rendered with Sequencer.

Chapter 12, Data Pipeline.
Learn how to prepare and organize your 3D data before exporting it to FBX. You learn the differences between Architecture and Props. Then, you explore several methods for getting your data into UE4, focusing on the FBX import and export workflow.

Chapter 13, Populating the Scene.
After your data is imported to UE4, it’s time to get it into your UE4 level. There’s several strategies to learn, and you’ll see several used here to get both your Architecture and props into the scene where you want them.

Chapter 14, Architectural Lighting.
UE4’s Lightmass Global Illumination solution is beautiful but also a huge departure from how you’ve ever rendered a scene’s lighting before. Learn to get stunning high-dynamic range lighting for your scenes that render in a fraction of a second.

Chapter 15, Architectural Materials.
Building upon the basics you learned about Materials in the first part of the book, you start to build a Master Material, programming parameters, and other shader logic to achieve a flexible, fast and beautiful set of Material instances to apply to the scene.

Chapter 16, Creating Cinematics with Sequencer.
Being able to render photo-realistic animations in a fraction of a second opens a world of creative possibilities. Learn to create Sequencer animations, using Cine Cameras to achieve physically correct, filmic looks including effects like depth of field, motion blue, and vignette. Once complete, you’ll see how you can record the 90-second walkthrough to disk at a resolution of 4k and 60 frames per second in a matter of minutes.

Chapter 17, Preparing the Level for Interactivity.
Collision is absolutely essential for a great interactive experience, and it’s also one of the most complex and misunderstood areas of UE4 development. Because video games require so many interactive elements, collision has been developed to be fast, but sometimes hard to setup. Learn how to easily get your level ready to walk around without falling through the floor or a wall.

Chapter 18, Intermediate Blueprints: UMG Interaction.
One of the greatest powers of Interactive Visualization is the power to compare options in-context and in real-time. You learn how to setup streaming levels and then swap them at runtime using Blueprints. You expose this functionality to the Player by creating a simple User Interface authored in UMG.

Chapter 19, Advanced Blueprints: Material Switcher.
If you’re really looking for a challenge, this is the chapter for you. Here you see how a production-ready material switcher Blueprint is developed. Not only does it expose advanced functionality to the Player, but also to the Level Designer (LD), allowing them to visualize the setup in-editor, creating a complete toolset that could be reused on any project.

Chapter 20, Final Thoughts.
This book only scrapes the surface of the iceberg that is UE4. I hope to leave you with a good foundation to build upon and some inspiration for where to go next. In the conclusion, I will discuss where UE4 and the industries that use it are heading, and how that will affect Visualization’s future.