January 24, 2011
We've been looking at the UDK for architectural renderings, specifically of transportation projects. We took a model that was provided to us in Sketchup and massaged it enough to get it into the UDK. We're pretty happy with the results.

We had to spend a lot of time getting the geometry optimized and broken up in such a way that the lightmaps were manageable. The other challenge was to get all the pieces to line up exactly where we wanted. We did that a couple different ways. The easiest is just exporting a static mesh exactly where it is in MAX. when you import it to the UDK and place it in a scene at 0,0,0, it will end up in just the right place.

We also developed a script that would generate a .t3d file describing the locations of each object in the scene. The .t3d script is fantastic for repeating details (trees, supports) while the static location export worked nicely for all the unique elements (the structure, terrain, etc.).

Bonus points if you can identify the structure! :P

For those that followed the jump, here's another!

[Update] I found some stills laying about: 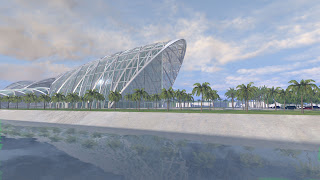 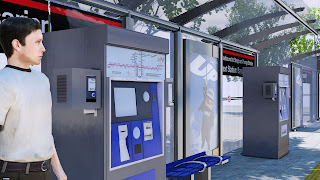